I was involved in the inception work (and the resulting delivery) for a project late summer last year. We estimated the total work to be nearly 500 units- too much to complete in the time we had. So, working with the client we cut it down to a reasonable scope (this client rocked at that!) of around a third.

What was really cool, however, was that a few months in after that initial scope had been delivered, we looked ahead for what we’d do next. According to our original inception, there was still more than double left to go, but, instead what we planned to do next was radically different. What we’d believed to be important 3 months ago, no longer was. The result was we delivered about 30% more, and about 50% overall was not part of that initial (500 unit) scope.

The real key was that our client had a very definite focus on work that was important (that is, work that delivers the most value) and avoided getting drawn into unimportant but urgent work, or left valuable work to the point it was always urgent. If you’re always working on urgent things you’re working at breaking point and miss out on the opportunity on higher value items that are less urgent.

Here’s a diagram to show the two 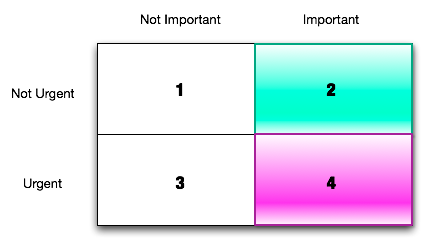 (More can be read about Covey’s grid on Wikipedia)

The right-most two quadrants (coloured blue and purple) are the key. Both represent sections that involve working on things that are valuable, i.e. those that are important to do. In contrast, 1 and 2 (the uncoloured boxes) are relatively unimportant and should demand less attention.

The rub (of course) is that urgent things tend to be shouty and demand attention. I would also say it’s often easier to measure how urgent something is rather than how important it is; as a result, urgency is an easier (and thus more likely) benchmark for prioritising tasks - despite ignoring whether the work is worth doing at all.

Some of the best people I’ve worked with (including our sponsor at our client last year) have a remarkable ability to cut through the context and spot what’s really important now; as opposed to just reacting to what’s demanding our attention now.